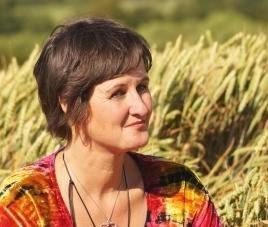 When we were on holiday in the South of England (Glastonbury area) in 2013 doing a crop circle tour under the guidance of Janet Ossebaard, the team and I were called to action when Janet began to show signs of a chronic condition that could turn her off completely if no action was taken quickly.
I was not aware of that, but it turned out to be a very special intervention.

This is what Janet mentions about it

"But the most impressing thing about me was an ET-healing session that was given to me by Jacqueline Fiolet.

She had already told me during the introductory meeting that she is healing people with the help of a team of extraterrestrial beings.

That sounded all very far out at the time, although I know the crop circles are created by intelligences beyond Earth and even thought it was very remarkable that my dog was no longer limping after Jacqueline had given her a quick session in between.
And I know I was thinking ... Is there something like suggestion and illusions for dogs? Do they respond to placebos?
And while I was questioning this inside my head, Jacqueline offered to give me an ET-healing session for she saw my energy draining by the increasing pains.

At the very least, this was a life changing event.

While the ET-healing took place I wasn' t being touched. Jacqueline occasionally asked some questions on behalf of the extraterrestrial beings.
I suffer from a type of MS called Neuralgic Amyotrophy, which is associated with enormous nerve pains. In less than half an hour my (chronic) pain disappeared almost completely!
And without being touched, with a rationale that kept on chatting that this was impossible, and if there were extraterrestrial beings working on me, why didn't I see them? Bla bla bla bla ... my thoughts rattled on and on.

And suddenly there was no more pain at all. Not one of the earth's doctors had been able to do this so far. And as I opened my eyes with my mouth wide open in amazement, I saw them for the very first time. Four light beings of different origin and size stood to the right of Jacqueline, a fifth stood behind her right shoulder. I felt there was a kind of surreal atmosphere. As I walked down on them in my mind and embraced them, Jacqueline said, "They're giving you a hug now...
More than a month has passed and the nerve pain is still gone. Unbelievable.
You will understand that I have been stalking Jacqueline ever since.
Not for a moment do I stop to ask her everything about these beings.
I want that contact as well, I want to learn and work with them as well!
Imagine if I could heal people like that too!
This has to go out into the world! ....."

Nowadays Janet has contact with the teams as well and is aiding mankind in providing ET-healing sessions :-)
The full report of Janet Ossebaard can be found at http://www.ninefornews.nl/janet-ossebaard-buitenaardsen-onder-ons/  (dutch language)

Thank you very much Janet for sharing this beautiful ET-healing!
~ Jacqueline and Joël with the extraterrestrial beings
~ Healing Centre Beyond Medicine - Extraterrestrial Healing & Communication