The illusion of Power Sometimes when you meet someone, it is so impressive that you can still remember that person very clearly years later.
For example, a few years ago we met a young man who provided activities and support in an organization that takes in young people who "don't fit in with society" and/or have been declared unruly.

This young man - let's call him Victor for convenience - was an experiencer himself. Our assessment was that Victor was not only a young person with a personal history of social or community problems, he was extraordinarily intuitive and understood flawlessly what we were talking about when we shared with him what we bring to the world, and he very quickly felt so safe that he began to share all sorts of things about himself with us during the first meeting.

For example, he shared with us that in his young life he has had to deal with more than 60 professionals from different institutions who wanted to help him adapt to society.
And that he knew from the very first contact whether someone could really help him or would "throw in the towel" after a few weeks.
He could feel that ... he could sense what the other person's real intention was. Whether there was an intention to find a solution to what was really going on or whether there was a plan into which he stupidly had to fit.
In the latter case, Victor did not cooperate, but neither did he work against it, despite the enormous pressure of the system that was often placed on him.
He simply made his own way.
Although the chaos in his outer world naturally also had a great effect on his inner world, it was extremely impressive to see the inner strength of this young man.
And how he was working to turn his negative experiences into a passion to help others.

However, it is very fascinating to delve into the mechanism of power and powerlessness he was exposed to, because we can learn a lot from that.
Read the above again, tune in and see if you can feel the different forces at play.

Often power and powerlessness seem to be two opposing aspects, with one party expressing power and the other experiencing powerlessness.
But in fact they are two aspects at play simultaneously in both parties, one manifesting in the inner world and the other in the outer world.

Someone who must use power in the outer world to get another person to do something lives in the inner world with a fear that the other person will not follow and is thus "somewhere" aware of powerlessness.

A person who feels powerless in the outer world as a result of the power exercised by another, lives in the inner world with a fear of the consequence of using his/her power to follow his/her own path and is thus "somewhere" also aware of the power he/she has. 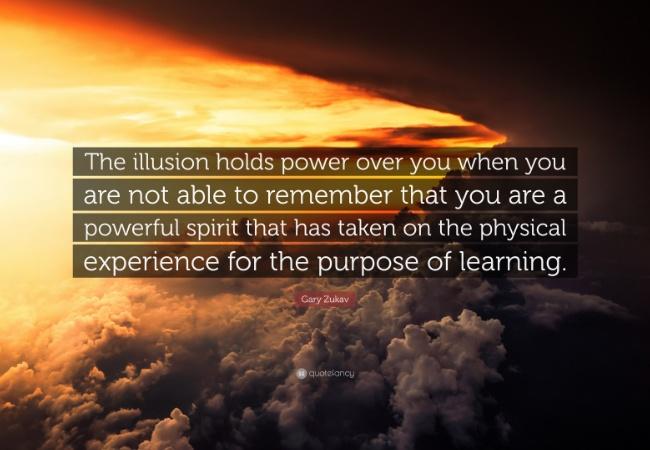 A power struggle we see in the outside world can also be seen as a projection of a power struggle in ourselves, in us as individuals as well as in our collective.
With the bonus of getting in touch with our fears as well as the beliefs that produce those fears.

Of course, we don't usually like this process; after all, we are confronted with deeper and deeper fears as the power struggle intensifies. Fears of losing to even fears of existing.
We then prefer to remove the triggers of our fears in the outside world.

But if we can face those fears, we slowly come closer and closer to the realization that ultimately no one has real power over anyone or anything outside of themselves.

This is the point at which fear-inducing beliefs lose their power.
It then no longer matters.
And when it no longer matters, the feeling of freedom and power to choose another direction arises. It is a moment of letting go.
The amount of energy the game takes no longer outweighs the benefits and is better spent creating another path.

The only real power there is is power over ourselves.
Once we can see through the illusion of power and powerlessness, it leads to a tremendous empowerment of ourselves.

Power and powerlessness are like two sides of the same coin ... one cannot exist without the other.
With the disappearance of powerlessness, power also disappears and vice versa!

But note ... Turning powerlessness into power (i.e., by "overcoming those in power") instead of personal power sets in motion a new cycle of power and powerlessness.
Being powerful is very different from having power.

The game is only stopped by not playing the game anymore,
not by choosing other pieces on the board or by reversing the roles.

The coming year 2022, a year with three 2s and a neutral 0, carries - especially in the first half of the year - an energy of working out polarities like power and powerlessness and promises to be "groundbreaking.

This parallels the phase through which millions of years ago (from our time perspective) the Orion System passed at the height of the Orion Empire and whose energetic remnants can be found in our solar system and are now being worked out.
In this time of transformation, the vast cosmic timelines of Orion (separation and limitation - negative principle) and Pleiades (integration and unification - positive principle) are converging.
It is truly a huge process.

And even though we have this transformation process to do ourselves, we don't have to do it alone.
All the connections in these cosmic lines are involved ... a cosmic cycle is coming to completion.

Finally, below is a very inspiring clarification from Bashar on 'The illusion of Power and the Power of Illusion.
An audio recording of a 1999 event (and emphasized many times in various events), so 'to-the-point' that it seems intended to be truly understood now at the pinnacle of our transformation, going through the eye of the needle, at this stage, 22 years later ...

The topic of power and powerlessness has many perspectives and we all have our own ways and timing of dealing with these topics.
This newsletter gives one perspective, but there are many other valuable perspectives !

We hope it will inspire you to develop your own new perspectives.
We would love to hear from you if you have an exciting question or positive input for a future newsletter !
Feel welcome ...

We wish everyone lots of Love and Wisdom
and a very Merry Christmas
and a fantastic New Year.
2022 - let's make History !!!

Love each other and hold on tight in the coming months !
For now, lots of love !!!

And see you soon, in person, at one of the online events and on the online community Human-ET One!