Etchilhampton is one of the crop circle hotspots in England and on July 24, 2022, there was another ... yet another extraordinarily intriguing crop circle.
See more in this post ... Wonderful Etchilhampton

From the moment I saw it, this crop circle continued to fascinate me because there is so much to see in it.
Every time it came back in my mind.
I was making a comment in Ton's post, but it got so big that I decided to dedicate my own article to it !

Remarkably, we then received a message from one of the practitioners who received images during an ET Healing session and described it as follows :

"While receiving the ET-healing, I first saw a kind of wings, like those of Isis.
Then I saw an image that looked almost the same as today's crop circle."

Along with my fascination with this crop circle, I decided to dive deeper into it.

Isis was the ancient Egyptian goddess of magic, love, motherhood and fertility and as a member of the Ennead she was among the nine most important gods in ancient Egypt.
Isis is usually depicted as a woman wearing a long robe and an empty throne as her headdress, representing the death of her husband and her role as the seat of Pharaoh's power.
In some depictions, she is shown as a woman with a headdress of a sun disk and horn.
She is also represented as the goddess of wind as a woman with outstretched wings.
Her symbol of the sky is the star Sept (Sirius).

Isis was called the mother goddess and represented the maternal spirit in its purest form.
She was the divine giver of life and was honored as the mother of one of the most powerful gods, Horus.
Together with Hathor, she had the care of Horus.

Isis is also known as the Egyptian giver of the knowledge of agriculture and the importance of farming along the Nile.
It is believed that the annual flooding of the Nile were the tears of Isis, which came because of the death of her husband and were preceded by the appearance of the star Septius (Sirius) in the sky.
Even today, this legend is known as the annual celebration of "The Night of the Drop." What stands out about this crop circle in Etchilhampton?

What I seemed to recognize fairly immediately was the compass and angle.
That is where I began my research, since this is a familiar symbol of Freemasonry.

Delving further into this, I see more Masonic symbols visible in the crop circle and I will mention three :

Everyone knows what an hourglass is, but most do not know what the symbol means among Freemasons.
The main meaning behind this symbol is the eternal passage of time, "the sand slipping away until there is nothing left, and therefore a constant reminder that life is finite, and therefore we must make the best of it while we can.

But it also acts as an analogy of the top and the bottom, and the need to sometimes turn the hourglass from top to bottom to continue the process symbolizes the constant cycle between life and death and heaven and earth.

The Square and Compass

The square and compass is the most recognizable Masonic symbol.
You may have seen it in several places in your city before, and both symbols have their own meanings.

The square represents morality, and comes from the 90-degree angle used to check the accuracy of the sides of a stone to see if the angles matched the "true" right angle of the square.

The compass symbolizes the power to "curb our desires and keep our passions within proper limits."

Together, they symbolize the importance of exploring your desires in a morally responsible manner.

In Freemasonry, the Blazing Star is a shining star within a star and symbolizes the culmination of a Mason's journey.
In Freemasonry, a man or woman strives to use the knowledge gained to navigate through life, like a star shining against a dark night sky.

Different types of stars are used, but the 8-pointed star as in this crop circle is a very special one in this context, as it has strong symbolic significance in ancient Sumer (Goddess Inanna), ancient Assyria (Ishtar) and ancient Egypt (Isis), as well as to even earlier times, the Anunnaki.
There are also remarkable similarities in the descriptions of these characters with Mary Magdalene.
Moreover, the famous Templar crosses are based on an 8-pointed star.

What I understand is that Freemasonry tried to keep this ancient knowledge from Egypt, "obtained" by the Templars in Jerusalem, away from the Roman Church and secure it in a secret organization.
Eventually the Templars were betrayed, tortured and murdered by a collusion between the French King Philip IV and the Vatican in 1307 after which the remnant reorganized in even deeper secrecy.
It is likely that (some of) the knowledge still ended up in the hands of Rome.

Freemasonry in those days were far from being ordinary house builders.
This ancient knowledge has a lot to do with the 'Architecture of the Universe' , the process of creation and manifestation, and comes from the region where this knowledge was transferred by the Anunnaki to their descendants from their relations with humans.
More on this in The Books of Enoch on Human-ET One.

Interestingly, original Freemasonry does indeed have many connections to Isis, as the practitioner noted during the ET healing session.

According to an Egyptian creation story, Isis was the daughter of Geb and Nut, the god of Earth and goddess of Heaven, and is a symbol of fertility and healing as well as the power of creation, magic and manifestation.
The Romans invoked her as "the One who is All."

The son of Isis is Horus, known for the Eye of Horus, the All-Seeing Eye, a symbol representing the sacred areas of the brain that hold the potential for every human being to achieve enlightenment.
The All-Seeing Eye is also an important Masonic symbol, as is the pyramid.

So in my opinion, this crop circle has certain characteristics of Masonic symbols, but at the same time they are not as accurate as they should be: 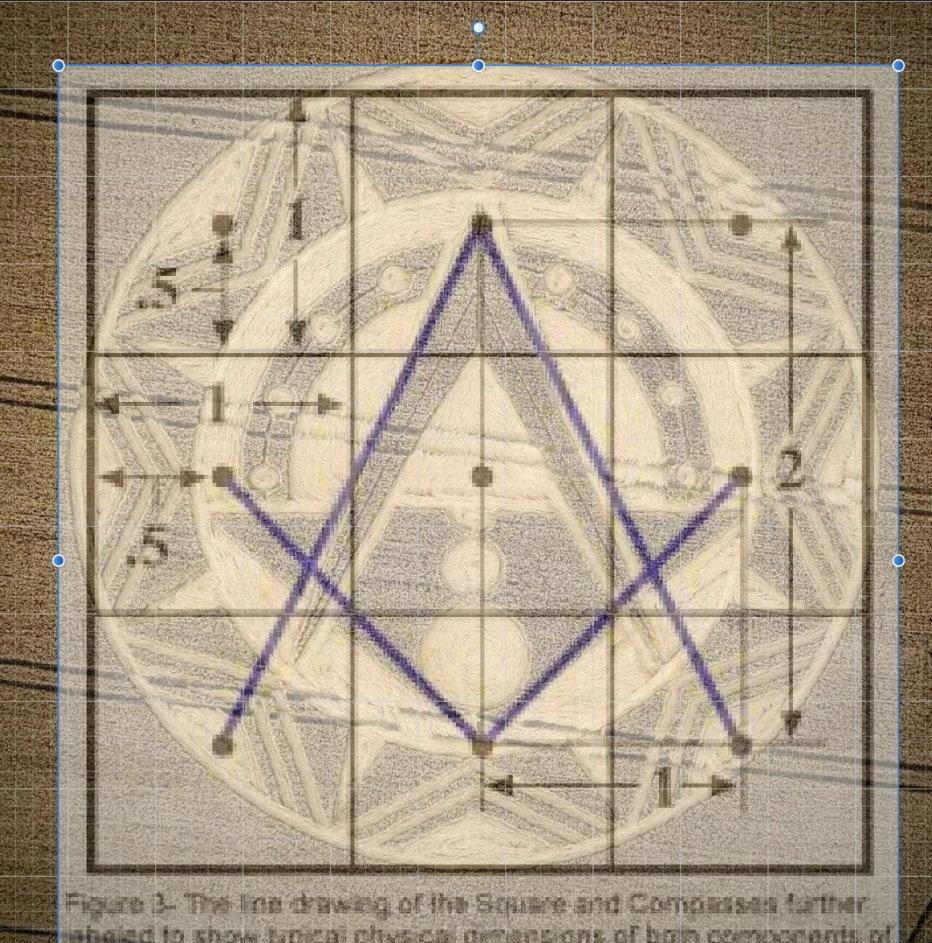 Then I wondered, if this is indeed all connected, why would it be brought into our consciousness now.... ?
Of course it could have many meanings, but thinking about it gave me a very fascinating insight !

In my experience, everything serves a purpose.
And to hold on to judgment is to lock ourselves into a reality we don't like.
Judgment always carries the energy of division/exclusion and is the opposite of wholeness and healing (and holiness), and so judgment always lowers our frequency and that energy is only released the moment we drop our judgments into the awareness of a greater perspective.
So judging as a process also has a beautiful function in itself, but locking judgments within ourselves ultimately does not help us move forward.

Even when this knowledge has been used in a negative way, for example, only for the benefit of personal interests and violating the integrity of others, we must be careful what exactly we are judging.

In my view, there is only one "Architecture of the Universe," one mechanism by which creation and manifestation operate, but which can manifest in infinitely many different ways.
So in both positive and negative ways and everything in between.
When we find it necessary to condemn something like "Freemasonry," for example, what exactly are we condemning?

Are we condemning the mechanism, the knowledge of that mechanism, the holders of that knowledge, its secret, its use, all its holders or specific, ....
Judgments quickly become very general and lead to enormous polarization, exclusion, division....
I think we have been able to learn this in recent years.
Often our judgments also have the effect of making us want to stay away from what we are judging about because we don't want to have anything to do with it.

So if we condemn the secret societies as something that should not exist, what will happen to the secret knowledge?
Will it go even deeper underground as it did in 1307 and remain available only to the few?
Or will we share this knowledge with each other so that we can all access and experience it?

And then the question ...
Are we as humanity ready to deal with such knowledge ?

All in all, an extremely interesting question and thought ....

What to do with the knowledge of the ' Architecture of the Universe '
that is hidden in all kinds of societies
and that has remained secret for millennia ?

I think we need whole new kinds of education to deal with this knowledge properly.
As you know, my passion is to transfer information, and I'm a big believer in freedom and sharing, but at the same time I see some areas of concern here.

What about you?
What a fascinating question for the vacation season!

Wishing you a happy and warm summer, enjoy the peace at the center of your heart despite the hectic and stormy world around us.

Hug each other and be there for each other.
For now, much love!