As long as humans have been alive, we have looked for ways to communicate with each other and leave our marks for future generations to know that we were here, what we accomplished and how things used to be.
The oldest form of this 'recording' is the artistic image. Even before the written language was invented, humans were drawing images of what they saw.

And as a part of this historic heritage, there are many fascinating examples of ancient art, that capture images of what can only be explained as ancient aliens and their appearance on our Planet through 'UFO' sightings.
These cave drawings, paintings, prints and sculptures are real ... they are all actual works of art that still exist in museums, cathedrals or authenticated caves.
We assume these early people had no modern-day technological understanding of what they saw, but still they used the natural world around them to image what they encountered.

These ancient works point toward the inescapable truth that we have been visited many times by extraterrestrial beings for a very, very long time.
As we know begin to understand - or shall we say, dare to admit - these contacts between humans and being from outer space have been there from the very beginning and are still happening each day, more and more people are opening up to this fact, each on his/her own individual way.

What we notice many times, is that when people come into contact with these otherworldly spiritual evolved beings they automatically start resonating in higher frequencies as themselves, resulting in healing of physical ailments as well as mental/emotional issues, but people also tend to reclaim their innate creative qualities.
People 'become' very inspirational speakers, writers, singers, dancers, actors or painters and allowing themselves to follow their highest excitement. A process in which they start sharing their gifts to the world just because it is fun.
We are all born creative, but most people are very good in hiding these qualities. It is not that the aliens learn us to be creative ... the only thing they learn us is to be ourselves and to dare showing ourselves to the world.

In our clinic we have had the privilege to be of help for several wonderfully talented people and it is really an honor to present two of them, Wieteke Koolhof - one of the first participants of the ET-Healer Program - and Trudie Jongkind.

We wish you a very pleasant experience in watching these pieces of Art.
Please take a moment for each piece for there are multiple layers in each one of them that will only unveil in time. It is like energy building up and feel what happens in your system. Just noticing, no labeling, explaining, changing, controlling ... just noticing ... be aware.

It is interesting that different civilizations around the world - separated by thousands of miles and spanning oceans for which they didn’t have the technology to cross at that time - all show visitors from the heavens in the same way.
Here you see the Australian cave drawings of the Waddjina (the cloud spirits).  Kimberley, Australia – 3000 B.C.

These Australian drawings date back 5000 years. They are believed to represent alien beings known as the Wondjina (Wandjina). These spirit beings are represented as paintings of giant humanoid figures, some measuring close to 23 feet tall.
They have gray alien-like eyes, cone-heads and no mouth or ears. These drawings look much like beings in helmets, or having physical qualities like Annunaki, Olmecs or gray aliens.
The Waddjina are said to be the spirits of the sky and the dreaming world (note : dreaming is just another state of consiousness, a dimension we enter every day!).

There legends says they create child spirits that must be found within a dream before they can become human babies within the bodies of women.
This reminds us of the many stories of aliens interbreeding with humans to create the hybrid races that we all decend from today.

In Aboriginal mythology, the Wondjina (or Wandjina) were cloud and rain spirits who, during the Dream time, created or influenced the landscape and its inhabitants.
When they found the place they would die, they painted their images on cave walls and entered a nearby waterhole.

These beings came down from the heavens, riding serpents and brought human life, knowledge, and agriculture to the ancient aboriginal people.

Notice how they closely resemble gray aliens, and annunaki alien descriptions of beings with large craniums, large eyes and advanced technology.
Some cave paintings show the Wondjina spirit beings present in large numbers and appearing to have helmets that glowed or were equipped with lights. 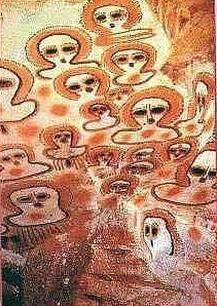