Civilizations, ET-Contact and Beyond Earth 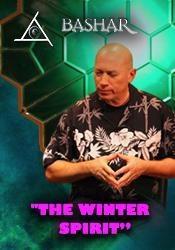 Willa Hillicrissing joins Bashar and discusses 'The Winter Spirit', an exploration of her encounters and understanding of nature spirits, how they relate to our future Earth, and how they form a part of the overall community that exists on Earth at that time.

Q and A Includes :

Includes a HOLOTOPE Guided Meditation ... a Transformative Experience of Light, Color and Sound.